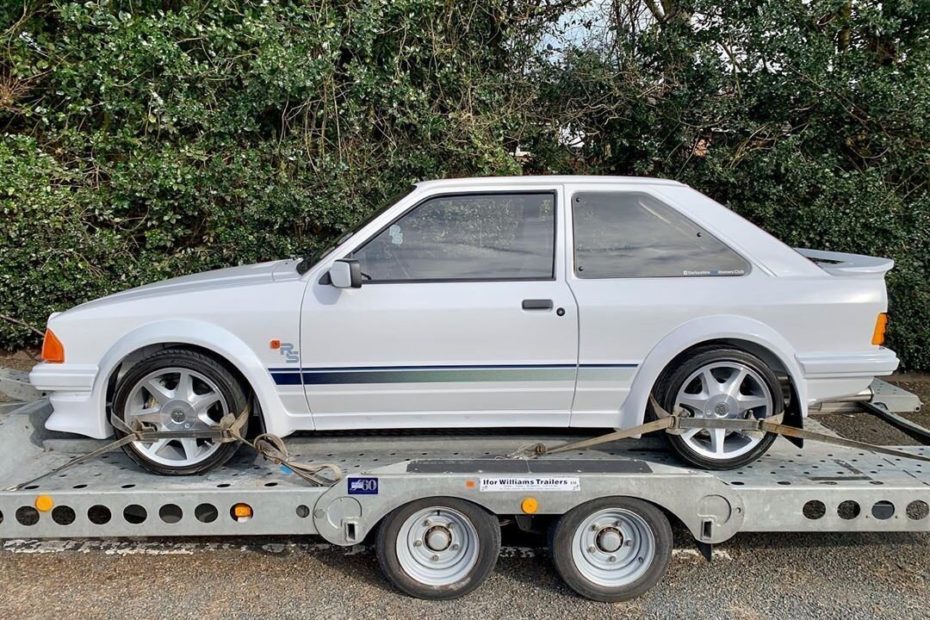 When it involves classic cars the bulk of enthusiasts don’t just fall in love with a model from a bygone era, it’s how the vehicle feels on the open road.

But despite a love affair with Ford Escorts which started in his teens, Mark McCormick will never know what his very own Escort RS Turbo Series 1 truly feels like to drive, having bought it for an undisclosed sum in January this year.

Mark, father of 1 to Nancy, Husband to John, and from Northern Ireland is a successful Tech Entrepreneur. Mark keeps the car in a special air chamber, although its already made a visit to a car show in Dublin, Ireland.

“I realise it might sound strange that I’ll never drive this car except for on and off a trailer, but right from the start that wasn’t what this was about,” said Mark McCormick, 26.

“Owning him gives me even as much enjoyment and it looks like things have come full circle.

“When I passed my test in November 2010, some months later an impulse purchase resulted in an RS turbo being brought home.

The dream didn’t last long, as insurance premiums were too high and there were words from my dad Peter McCormick, that I won’t repeat!

Mark told me he had no other option apart from to return the car back to the previous keeper.

“To say I was disappointed was a real understatement, but I was determined to possess one from then on.”

Mark originally hoped to restore a model but found that raising a family and working long hours got in the way.

His daughter Nancy, who is 2 and half years old appears to be an admirer of the Ford, as is his husband, George.

He spoke with real passion and said “In my eyes the RS is a proper car, new cars don’t do anything for me”, the car was restored between November 6, 2005 and April 3, 2006 and hasn’t been driven since. Which I’m sure to other escort enthusiast out their seems a real shame and disappointment.

Mark’s refusal to take his pride and joy out for a spin is perhaps more understandable if you consider the fact that it has more than doubled in price across the decades.

“He’s part of the family, my dad Peter jokes that he’ll take the car round Leopardstown Racecourse (Dublin) but that certainly won’t be in my lifetime,” he said.

“I can’t believe how much the value has gone up in fairness, I don’t think anyone could’ve predicted that it would more than triple in price over the years.

Mark even makes sure to swap parts to transportation parts when the Ford gets on the road – probably a wise move because many of the parts are no longer available.

The Ford Escort RS Turbo is based on the 3-door Ford Escort Saloon and was supplied in a Diamond White body colour only, except for a very few one offs.

The RS Turbo is given a distinctive sporty appearance by body coloured front grill, bumpers and aerodynamic aids; the deep front spoiler contours are continued around the car by front and rear wheel arch spoilers and interconnecting door sill extensions.